Why is Nutrigenomics such an exciting and emerging health topic? Because we all have slightly different genetic variations – and these can change the extent to which different foods or nutrients can be helpful or harmful to us as individuals. These gene variations change our susceptibility to different diseases and can make certain dietary changes dramatically more important for one person than another. 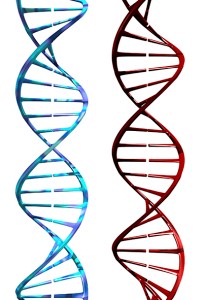 This is the first of a series of articles on the field of Nutrigenomics. The study and inclusion of Nutrigenomics is surely part of the future for pro-active, personalised, predictive and preventative healthcare. This article is kindly provided by nutritional therapist Katie Clare, and it is a fascinating read for both professional health practitioners and anyone interested in their health.

The future of healthcare is moving towards an increasingly personalised approach where we treat individuals differently, based on their unique needs. People are living longer lives now and this brings with it a focus on strategies for prediction, prevention and of being pro-active. Our society wants optimal health and longevity. We have gone way beyond merely treating symptoms once diseases have fully manifested inside the body.

Individuality in both health and disease is thought to be determined by two fundamental and intertwined factors; environment and genetics. Environment covers many aspects of the life we live including diet, lifestyle, toxicity levels, stress levels, wear and tear on the body and also infections.

There has always been a lot of focus on this as we have been able to see, understand and measure these different variables and make conclusions based on our findings. For example we may say that a Mediterranean Diet, adjusted for the increased stress and toxicity levels of today, is superior to other diets for cardiovascular health, based on research into meta-analysis of epidemiological studies. However as well as environmental factors we now also have genetic predisposition to consider and to incorporate into this research. It allows us to go a step deeper for each individual.

DNA – our own digital code

Genetic material, DNA, is digital information like a computer code. Until society had learnt how a digital system worked and how to ‘compute’ data we had no chance of understanding this genetic material. The long strands of sugar molecules, making up the two sides of the famous double helix structure were actually discovered in 1860, but with the purely analogue world view held at that time society couldn’t work out how this could be such important information. It wasn’t until the beginnings of the digital age that the penny dropped, in 1953, and we were able to unwrap our own digital code.

Subtle differences in our individual DNA change the way we function in discrete ways. Part of this effect can be how we each adapt to specific environmental conditions. These small genetic variations are very different to actual genetic disorders, such as Down’s syndrome where a whole chromosome is affected. A chromosome contains many thousands of genes whereas the genetic variations discussed in nutrigenomics are normally just a tiny change in one specific gene.

A genetic variation is called a polymorphism when more than 1% of the population is known to have that same genetic change. Polymorphisms can be very common though and some could be carried by up to 50% of the population. The most common type of polymorphism is called a Single Nucleotide Polymorphism (SNP -which is pronounced ‘snip’). This means that just one of the letters, the chemical bases of the DNA, either an A, T, C or G, is different. So for example an ‘A’ may have been replaced with a ‘T.’ As these letters code for different amino acids, changing one to another may result in a different amino acid being slotted into a bodily structure as it is being built. This will then change the structure and function of what has been created. For example one of the most discussed SNPs, MTHFR, effects how the body metabolises folic acid.

These genetic differences don’t actually cause disease or health, they just alter our susceptibility to our environment and therefore different health and disease outcomes. The media often distorts these new discoveries with headlines such as ‘gene discovered that causes obesity’ but this is not really how it works. The universe is more like a big cauldron within which genetic variations and the many environmental influences are all in the mix together.

It actually makes a lot of sense for nature to create genetic variation by design, rather than by it being a mistake in the DNA replication process or a bad thing to have happened. Nobody would buy six lottery tickets with the same number on, so why would nature want to make all of its new humans with the same susceptibility to the environmental conditions that we may face?

Two people may have the same early warning signs of a particular disease, such as high cholesterol or high blood pressure markers but choosing the best course of action for them could depend, partly, on their individual genetic variations. One of these people could have the genetic variation needed to make a week long, low calorie, vegetable juice fast a great way to reduce their triglyceride levels. However the other person could have a genetic variety making them very sensitive to carbohydrates, only leading to increased triglycerides as a result.

Another example is osteoporosis, a disease effecting around a quarter of menopausal women in the UK. Testing for genetic variations can identify individual variations on bone reabsorption, vitamin D receptor function, bone collagen formation as well as relevant inflammatory mechanisms. It is thought that around half of the UK population have a genetic variation meaning that they don’t actually respond very well to increased levels of calcium, currently one of the first lines of treatment offered to everybody for osteoporosis. If it was known that somebody had this genetic variation then other treatment options available could be investigated straight away.

Detoxification and biotransformation are hot topics in nutrition and nutrigenomics is very useful here too. Glutathione is known as the body’s master anti-oxidant compound, yet there are three types of related SNPs which will alter how the process functions. Understanding them uncovers part of an individual’s susceptibility to diseases such as various cancers. For somebody with a particular SNP consumption of garlic could be three times more protective against cancer than it is for somebody else with a different glutathione variation. Consumption of brassicas works in the same way, just how protective it is depends on your particular genetic variations. It’s important to remember though that both garlic and brassicas have many more benefits to health than just being part of a cancer-protective strategy and so it would continue to be a good idea to eat them.

If an individual did find out that their glutathione pathways were not able to work as efficiently as they would like, due to particular SNPs, then they could benefit from this information by accessing support for their body in other ways; such as using supportive detoxifying nutrients like N-acetyl cysteine or milk thistle. They might also want to ensure that all of the co-factors needed for the detoxification pathway were fully topped up, this means B vitamins and minerals like zinc, magnesium, copper and selenium.

This is truly personalised nutrition, allowing both practitioners and individuals to more effectively prioritise the dietary changes to be made and to decide which supplements will be of most use. Understanding genetic predisposition removes some of the guess work and the experimentation involved. These new discoveries really are great news for proactive people who want to minimise their health risks and optimise their health.

A new trend in USA is to send away cord blood samples from a child’s birth for DNA analysis so that the parents are aware, from the very beginning of their child’s life, of ways that they can direct their actions towards optimising their child’s wellbeing. Genetic testing can also be of great importance to people with a family history of disease such as heart disease or colon cancer. Thirdly, in complicated and challenging health cases genetic profiles can help unfold the story to a deeper level, providing new options and ideas.