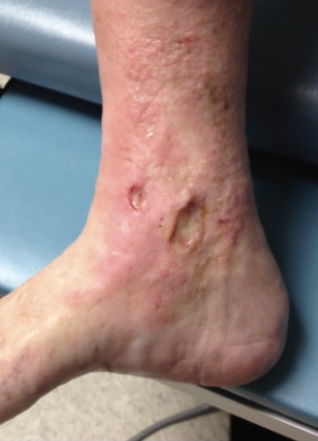 Patients with Venous Leg Ulcers are often in the high age group and have had recent operations commonly to the knees or hips. In the UK it’s been estimated that 1 in 50 persons over the age 80 suffers long term from leg ulcers.

Other high risk groups are those that suffer from osteoarthritis, paralysis or obesity. Especially those who suffer from obesity and have reduced movement often suffer from skin ulcers.

What typical for all skin ulcers including venous leg ulcers is that they take more than 4-6 weeks to heal, they are painful, cause itching and swelling. Other common effects are hardened skin around the ulcer that might be discoloured. More sever and long term skin ulcers could see the wound produce a foul smelling discharge.

So why has Hypochlorous Acid (HOCI) proven to be so effective in treating skin ulcers? HOCI is a natural product produced by the body’s own immune system to fight of infections and inflammations. It was used already in World War 1 to treat gun shoot wounds. But it’s first lately that modern production techniques using electrolysis that the medical industry has been able to produce HOCI in stable forms with a longer shelf life. This makes the product unrivalled in treating skin ulcers.

During an 8 year trial at Lake Wound Clinics a total of 849 patients with 1249 venous leg ulcers where treated with Hypochlorous Acid in the treatment protocols utilizing the standard regimen of wound cleaning, debridement and compressing bandaging using an aqueous solution of HOCI instead of the normal saline.

The regime caused all ulcers to close completely. Time frames varied from 7 days to 45 days. Improvements on the ulcers were in all cases seen within a few days of the treatment starting. Patients reported less pain, swelling was quickly reduced and foul discharge from wounds was eliminated.

Factors that played a role in the healing time of the ulcers and a probable cause of longer healing time included such things as active smoking, use of steroids, use of street drugs and advanced age. Other factors that affected the time scale of healing were recurrent venous ulceration, stasis dermatitis, lipodermatosclerosis and morbid obesity.

Even more interesting is that the trial showed that the infection with one or more multidrug resistant organisms did not delay closure of the wound.

This means that products containing only clear Hypochlorous Acid show the best treatment results with no side effects noted. Products produced by companies such as Liquid Medical Ltd in the UK that contain only HOCI and at strength greater than 100ppm, Liquid Medical Wound Clear, fill a space in the wound treatment market and can easily be used by the patients themselves with no complicated procedures, while still seeing rapid improvements.

In the USA alone there is an estimated 3.2 million people who suffer from late stage venous insufficiency with an average healing time of 190 days at an average cost of $10 000.00 per patient.